The role of the horse

By the early 16th century, horse teams were beginning to replace ox teams in ploughing work in Britain because of their greater speed, strength and agility, particularly on lighter soils; in heavier soils ox teams retained an advantage, both because they pulled more steadily, albeit more slowly, and because they could work despite being fed by grazing alone. The use of horse teams in Britain was made possible in part because of an increase in the farming of oats, a staple food for hard-working horses.

During the Hundred Years War of the 14th–15th centuries, the English government banned the export of horses in times of crisis; in the 16th century, Henry VII passed a number of laws relating to the breeding and export of horses in an attempt to improve the British stock, under which it was forbidden to allow uncastrated male horses to be turned out in fields or on common land; they had to be “kept within bounds and tied in stalls.” This ruling caused inconvenience, and the practice of gelding horses became widespread. In 1535, Henry VIII passed the Breed of Horses Act aimed at improving the height and strength of horses; no stallion under 15 hands (60 inches, 152 cm) and no mare under 13 hands (52 inches, 132 cm) was permitted to run out on common land, or to run wild, and no two-year-old colt under 11.2 hands (46 inches, 117 cm) was allowed to run out in any area with mares. Annual round-ups on common land were enforced, and any stallion under the height limit was ordered to be destroyed, along with “all unlikely [small horses] whether mares or foals.

During the successive reigns of queens Mary I and Elizabeth I, laws were introduced with the aim of reducing horse theft, requiring all sale transactions of horses to be recorded. Laws calling for swingeing culls of “under-height” horses were partially repealed by Elizabeth I in 1566. Areas of poor quality land could not support the weight of horses desired by Henry VIII, and were exempted because of “their rottenness … [They] are not able to breed beare and bring forth such great breeds of [stallions] as by the statute of 32 Henry VIII is expressed, without peril of miring and perishing of them”. This allowed many of Britain’s mountain and moorland pony breeds to escape slaughter. Human population expansion in Britain during the reign of Elizabeth, and the resulting necessity for improvements in transport, increased the demand for good horses. Horse transport was so extensive at the time that on one morning alone 2,200 horses were counted on the road between Shoreditch, just north of the city of London, and Enfield, about 14.6 miles (23 km) further north.

During the Tudor and Stuart periods, horse ownership was more widespread in Britain than in continental Europe, but it suffered a decline in the harsh economic environment of the late 16th and early 17th centuries. With economic recovery, the number of horse owners increased again.

Return to top of the page 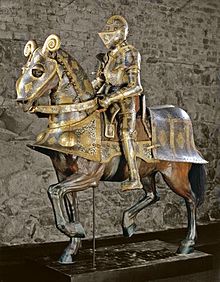 Horse armour for a destrier

Horses were bred to a particular type/use, instead of as a breed. Riding horses included the:

From armour that still exists it would seem that destriers and coursers were about 15 hands high (60 inchs/5 feet or 152cm).

The ambling gait is faster than a walk and slower than a canter; it made travel over long distances more comfortable and could be sustained by both horse and rider. The three following types of horses could amble:

Other types of horse included the sumpter/pack horse for carrying, and the draft horse for pulling heavy loads.

While the colours of horse remain much the same, some names have changed:

Return to top of the page